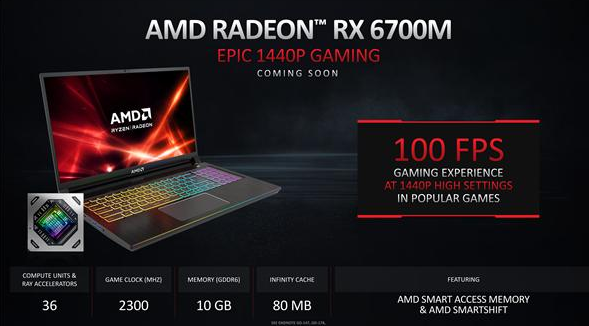 AMD: During Computex 2021, AMD released the Radeon RX 6000M series of graphics cards, introducing RDNA 2 technology into gaming laptops. The company has launched three GPUs, which will soon be available in the market to compete with Nvidia’s RTX 30 series.

Compared with the first-generation RDNA GPU, the new product provides a performance leap, with a 1.5-fold increase in performance and a 43% reduction in energy consumption. In addition, the notebook graphics card supports ray tracing.

Below, you can view the three gaming notebook graphics card models shown by AMD.

The most powerful model in the AMD notebook GPU series is the Radeon RX 6800M. The product has 12 GB of GDDR6 memory and 40 computing units.

Specifications also include a clock frequency of 2300 MHz, 96 MB cache, and 145W TDP or higher. This product will compete with Nvidia’s RTX 3080 and other graphics cards.

AMD’s second most powerful GPU for notebook computers is called the RX 6700M, which has 10 GB of GDDR6 memory and 36 computing units. In addition to the frequency of 2,300 MHz, the graphics card has a TDP of 135W and an 80 MB cache.

According to the manufacturer, the graphics card can run modern games at 1440p resolution at a frame rate close to 100 fps.

For those who want to play Full HD, AMD launched the RX 6600M, which is the company’s entry-level graphics card in the notebook market. GPU is equipped with 28 computing units; in addition to 100W TDP, it also brings 8 GB of VRAM, 2177 MHz clock frequency, and 32 MB of cache.

AMD released a benchmark test showing the performance of the graphics card and RTX 3060. The graphics point out that the Radeon series GPUs provide frame rates of 62 to 76 fps in games such as COD Black Ops Cold War and Assassin’s Creed Valhalla.

The first notebooks equipped with RX 6000M graphics cards will be available this month and will run in different price ranges. During Computex 2021, companies such as Asus, MSI, and Lenovo launched gaming laptops scheduled to be released in June.

The first notebooks equipped with the RX 6000M series will also be part of the AMD Advantage program, which carries a certificate and encourages the use of the company’s hardware. In other words, in addition to the new Radeon GPU, the product will also use Ryzen chips to ensure better gaming performance by using technologies such as smart access memory and SmartShift.