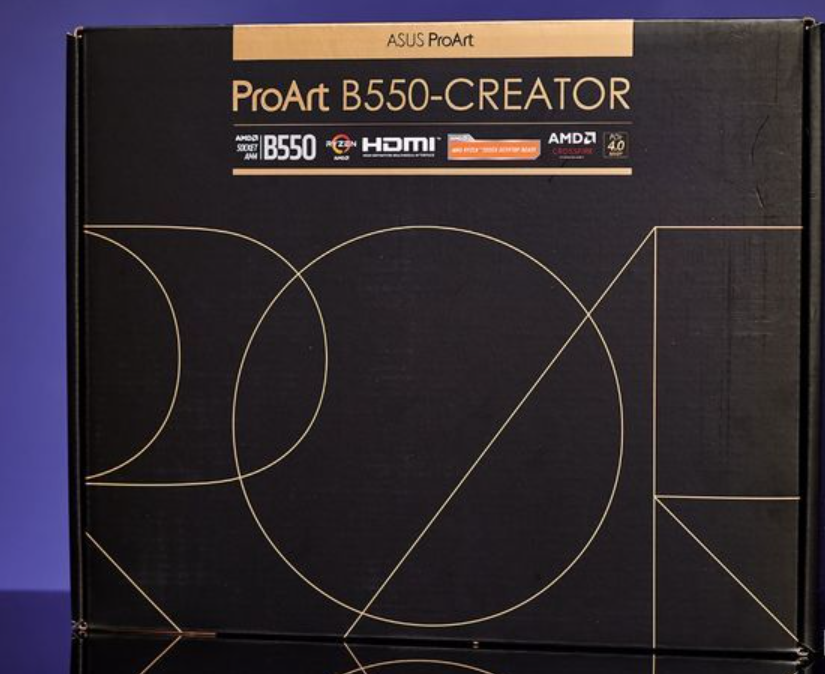 ASUS ProArt, a sub-brand dedicated to content creators, is the latest series of highly personalized products launched by ASUS after ROG and TUF GAMING.
Compared with those game motherboards, ProArt B550 CREATOR is a bit too low-key. The overall tone is black, with gold lines as the outline of the motherboard’s fashionable design elements.

To allow creators to have an efficient and stable platform, ProArt B550 CREATOR is equipped with a powerful power supply module, which can support up to Ryzen 9 5950X processor; the corresponding VRM heat dissipation is a separate large-area heat sink, which can ensure that the platform is under high load. Time-temperature is well distributed..

4 DIMM memory slots, a single slot can support a maximum capacity of 32GB, so it is easy to set up a dual-channel maximum 128G memory configuration. At the same time, the higher the memory frequency, the faster the rendering speed. It happens that the motherboard supports up to DDR4-4866MHz high frequency, so I recommend that you use high-frequency and low-timing slivers, such as the phantom halberd DDR4-4000 C15 used in my test.

The storage interface is also relatively rich, retaining 4 SATA, allowing players to be compatible with old-style storage devices. Two M.2 accelerate the storage performance of the entire platform, when equipped with Zen3 processor, M.2_1 is PCIe Gen4 x4 high-speed interface, Can be equipped with Samsung 980 PRO, and B550 allocates M.2_2 channel, PCIe Gen3 x4 interface can be used as a temporary cache disk of the system.

Do you think this is over? A good show is yet to come. The most prominent design of ProArt B550 CREATOR is the I/O device interface on the back. Dual Thunderbolt 4 Type-C ports, dual 2.5G high-speed network ports, and HDMI 2.1 ports can use the transmission between high-speed devices and allocate more bandwidth to speed up the processing speed of necessary applications.

So why did the creators of the Dual Thunderbolt 4 interface improve? Raiden 4 is currently the most comprehensive interface, with multiple functions such as data transmission, display transmission, PCIe channel, and large-function charging. It may not be too obvious for everyone to say that. A simple example: using the Thunderbolt 4 interface on the ProArt B550 CREATOR motherboard, a single C2C line is directly connected to the display; when coupled with the daisy chain technology, it can drive two 4K display devices. Only one line is needed for the dual large-screen creation platform.

At the same time, Thunderbolt 4 can be connected to DOCKs to expand multiple USB ports, audio ports, and network ports, and even directly connect to large data storage devices (disk array devices, NAS, etc.), so you no longer worry about machine storage. Insufficient space, which can also speed up collaborative creation in the team.

As a mid-to-high-end motherboard, ProArt B550 Creator is really powerful. Equipped with Ryzen 9 5900X and RTX 3080 Ti, it can be said to be the most cost-effective combination of creators and gaming platforms. In addition, ProArt B550 CREATOR is extremely self-directed, with high power supply specifications, strong heat dissipation efficiency, and even expansion performance with dual Thunderbolt 4 Type-C ports and dual 2.5G high-speed network ports, which are already unmatched by many high-end motherboards.

Finally, with the software developed exclusively by ASUS, it can consider both safety and simple control. Finally, ProArt B550 CREATOR is certainly not only suitable for content creators but it is also suitable for high-end gamers.