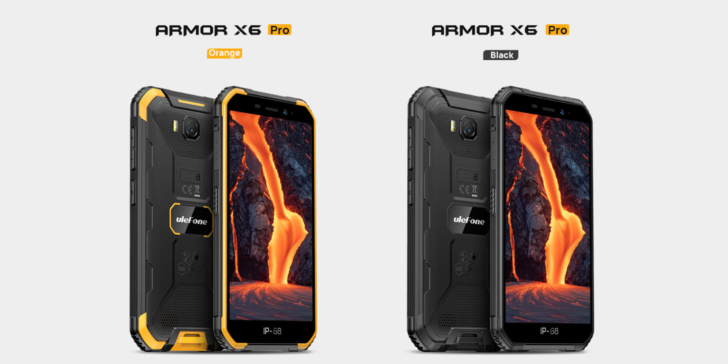 According to the official introduction, the Armor X6 Pro can be immersed in 1.5 meters of water, water, and various fine dust and particles for up to 30 minutes. The machine has a multi-layer polycarbonate shell, and every possible gap is covered with waterproof glue. And the gasket seal is blocked, and the exterior is also coated with a polymer coating for waterproofing. Ulefone says the Armor X6 Pro is suitable for special industry workers, builders and rescuers of all kinds.

In terms of hardware configuration, Armor X6 Pro is equipped with a 5.0-inch IPS LCD with a resolution of 720×1280 pixels. The processor is MediaTek Helio A22 4G, which supports dual SIM cards, 4GB of memory and 32GB of storage, which can be expanded through SD cards storage. Additionally, the phone supports Wi-Fi ac and Bluetooth 5.0, as well as GPS with GLONASS, Beidou and Galileo, NFC with Google Pay, a 3.5mm jack and FM radio support.

Armor X6 Pro has a rear 13MP, f/2.2, IMX214 camera with dual LED flash and can record video up to 1080p. Front camera is a 5MP, f/2.2, OmniVision OV5670 sensor that supports underwater photography. The machine is equipped with a 4000mAh battery that provides 5W charging power through the micro USB interface.

Software-wise, Ulefone also pre-installs the latest Android 12 operating system for the Armor X6 Pro with advanced security and extra features. Officials say the ROM itself is clean, with no ads or unnecessary UI elements. There is also a programmable physical button on the side of the phone, which also supports gloved operation.

Techloaded learned that the Armor X6 Pro has two colors orange and black, and the starting price is $119.99 (about 812.33 yuan)