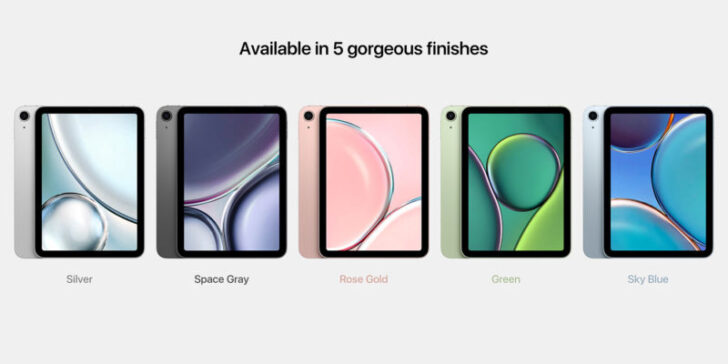 In the past few days, we have received some new rumours about upcoming iPad models. Most rumours and leaks mention possible specifications, design changes, and possible release windows. However, the latest information is a digital image created on Behance.net by Twitter users @apple_idesigner and Michael Ma. These new renderings show us the possible new colours of the upcoming iPad mini, as well as a complete list of specifications.

We expect to launch several new Apple products before the end of 2021, many of which may arrive as early as next month, and the new iPhone 13 lineup may be released at the same event. The device may be equipped with the new Apple Watch Series 7, which is rumoured to be equipped with a larger case; the 9th generation entry-level iPad may use a familiar design, but with more powerful functions under the hood, as well as the new 6th generation iPad mini.

Now, the latest renderings of the iPad mini indicate that it may be a more compact version of the 10.9-inch iPad Air. It may be equipped with an 8.4-inch Liquid Retina display with a 60Hz refresh rate and narrow bezels all around. The size of the new tablet is 206 × 138 × 6.1 mm, and it is believed to be available in five different colours, including space grey, silver, rose gold, green and sky blue. These colour options are the same as those available in the latest iPad Air and M1 iMac, and they are believed to also apply to the new MacBook Air update.

The new 6th generation iPad mini is also expected to be equipped with Apple’s 5nm A14 bionic chip, and its storage options allow you to choose between 64, 128 and 256GB. This new device can also support Apple’s third-generation Apple Pencil and 5G connections. Just don’t expect to get Face ID because there are rumours that this new iPad model can still use Touch ID, but the sensor will now be embedded in its power button. Remember to use some salt to get this information.