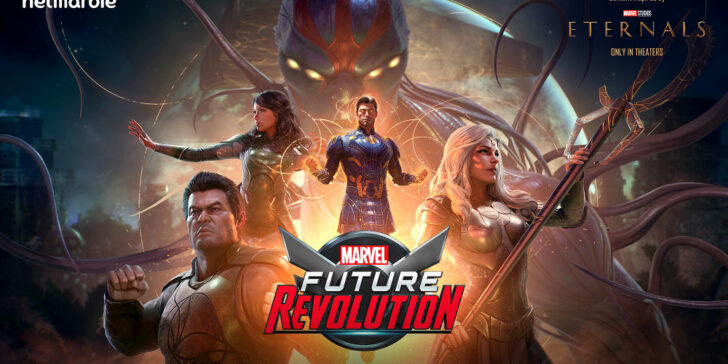 Players are now able to fight with partners who play supporting or strengthening player roles. Each partner has an active skill that can further assist the player in battle. Players can have up to 4 partners in each team and can obtain partners through rewards, aggregation boxes, and other activity rewards. In addition, after this update, the four eternal races “Circe,” “Iggres,” “Tina,” and “Gilgamesh” will join “MARVEL Future Revolution” as partners.

Players can join forces with the Eternal Race to participate in the new limited-time event epic invasion war “Eternal Race” and cooperate with the superhero team in the endless battle against “Cro” and his army “mutant race,” and get rewards. This event will be available for a limited time from November 3 to November 28. In addition, the Alliance of Players can also look forward to the brand new “Alliance Omega War” beta that will be launched in 2 weeks. In the “Alliance Omega War,” alliances can compete with each other for reputation and rewards.

The remaining updates and optimizations of “MARVEL Future Revolution” include:

● Alliance Ranking- A brand new system for ranking alliances, based on the contribution and activity of members, including donations, sign-ins, and alliance points levels. The ranking will be updated every week, and rewards will be given every season. The result of the newly launched “Alliance Omega War” is also included in the league rankings.

● Elite Ranking-The most powerful players will be recognized in the Elite Ranking, which will be divided into teams and heroes, and the player who ranks first will get a special mark.

● Conversion- Players can now change regional costumes, special costumes, and Omega cards to use with other heroes in the squad. The costume will retain its information and data, and the special attributes of specific heroes of Omega cards will be converted and applied to new superheroes.

“MARVEL Future Revolution” is Marvel’s first open-world action RPG game built on mobile devices. It has 3A quality and was created by Marc Sumerak, a well-known Marvel writer (works including Spider-Man, Avengers, etc.). High-quality, adventure-oriented, and a wonderful plot. In the multiverse, multiple earths converge into a new “main earth.” Players will join the newly formed superhero team “Omega Flying Team” as the last line of defense against the endless evil forces and threats of super villains. Players can choose characters from 8 heroes to play. At the same time, they can also put on the rich and classic uniforms of the Marvel Universe. Each character can match up to 400 million clothing combinations. Players can help superheroes to choose and match carefully, and they can also explore every original corner of the open world. For more information about “MARVEL Future Revolution”,

Established in South Korea in 2000, Netmarble is a top game developer and publisher, breaking the limitations of mobile game experience and launching highly innovative game works, including “MARVEL Future Revolution”, “Ninokuni: Interlaced World”, “Paradise” 2: Revolution, “Seven Deadly Sins: The Battle of Light and Darkness”, “Sword Spirit: Revolution” and “Marvel Future Battle”. As the parent company of Kabam and a major shareholder of Jam City and HYBE (formerly known as Big Hit Entertainment), Netmarble is committed to developing diversified mobile games through its well-known trademarks and cooperation with different IP owners around the world. For more information, please refer to the official website http://company.netmarble.com .

Taiwan Netmarble Joybomb Inc. (Netmarble Joybomb Inc.) was established in July 2012 and has a professional operation, business, customer service and marketing team. The exclusive agency for mobile games including “Nationwide Baseball Pro”, “The Realm of the Elves”, “Miracle Lovers” and “Baseball Palace”, and cooperate with the paper folding game “Love and Producer”, in addition to assisting the parent company Netmarble The company’s (Netmarble Corporation) global version of the game’s marketing and customer service in Taiwan, Hong Kong and Macao has now become a leading brand in the Taiwan, Hong Kong and Macao game industry, and is firmly in the leading position in the mobile game market.