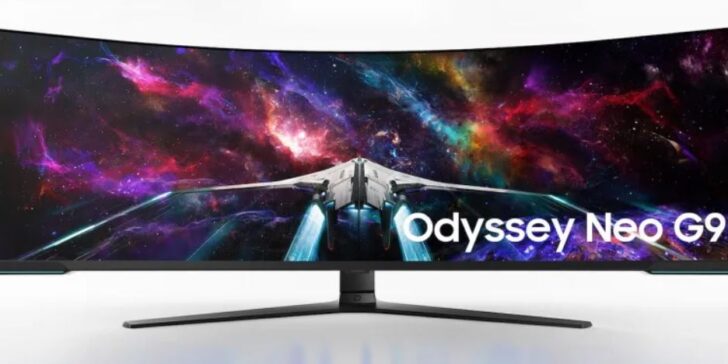 Samsung has released the next generation of its large monitor line with the 57-inch Odyssey Neo G9. This ultrawide monitor has a 32:9 aspect ratio, making it more comfortable to use as an up-close monitor compared to the 55-inch Odyssey Ark, which has a 16:9 aspect ratio. While the Neo G9 may provide a more immersive experience while playing games or using multiple apps, it should not be used in a vertical orientation.

The Neo G9, Samsung’s latest large monitor, boasts an 8K display with a resolution of 7,860 x 2,160 pixels, making it the first dual UHD mini-LED monitor. With a 1,000,000:1 contrast ratio and HDR 1000 support, as well as a matte display to reduce glare, the Neo G9 is well-suited for high-performance gaming thanks to its 240Hz refresh rate and 1ms response time. Additionally, the Neo G9 is the first gaming monitor to offer DisplayPort 2.1 connectivity. Samsung has not yet announced the price of the Neo G9, but it is expected to be available in the near future. Samsung is also debuting its first curved OLED gaming monitors at CES this year, including the Odyssey G8 OLED. This 34-inch, 21:9 display has a resolution of 3,440 x 1,440 and a 175Hz refresh rate, and is already available in some markets with a US release expected soon.