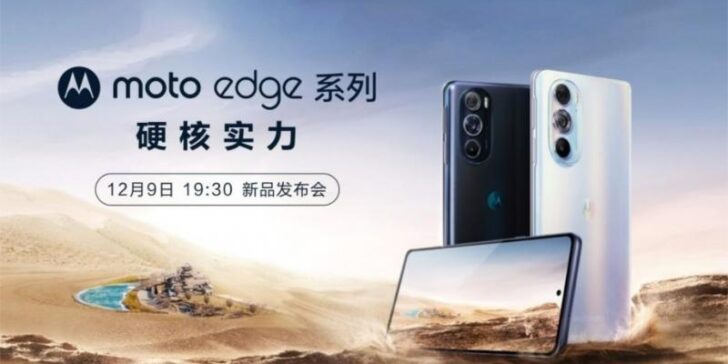 Motorola will officially launch the upcoming Motorola Moto Edge X30 smartphone tomorrow. The new renderings appeared on the smartphone before the announcement; let’s take a closer look at what happens. The specifications have also been leaked before, and it may just be the first device equipped with the latest Qualcomm Snapdragon 8 Gen 1 platform.

Motorola shared new pictures on Weibo and confirmed the leaked renderings we reported earlier. Although we don’t have official information about the specifications yet, we have leaked it earlier, and this is everything we hope to see tomorrow.

There are rumors that Moto Edge X30 will be equipped with the new Snapdragon 8 Gen 1 chipset. Although the memory options are unknown, we expect at least 8GB of memory. As for the display, there have been rumors that it will be a 6.67-inch panel, and Motorola confirmed that it will be equipped with a 144Hz refresh rate and will pass HDR10+ certification. It also has a punch-hole cutout for the 60MP selfie camera. There are also rumors that there is an under-screen selfie camera, although this may be reserved for high-end X30 Edge Pro devices.

On the back, the device will be equipped with three camera sensors. The main sensor is a 50MP unit, and the auxiliary sensor will be another 50MP camera for ultra-wide. It is reported that there will also be a 2MP sensor. The 5000mAh battery supports 68W wired fast charging in terms of battery life.

We don’t need to wait longer to understand the actual specifications and see the device in real photos and renderings. Motorola Moto Edge X30 will be released tomorrow and is expected to go on sale on December 15. It is not clear whether the device will be launched outside of China, but other Edge series products are often listed in North America and Europe.