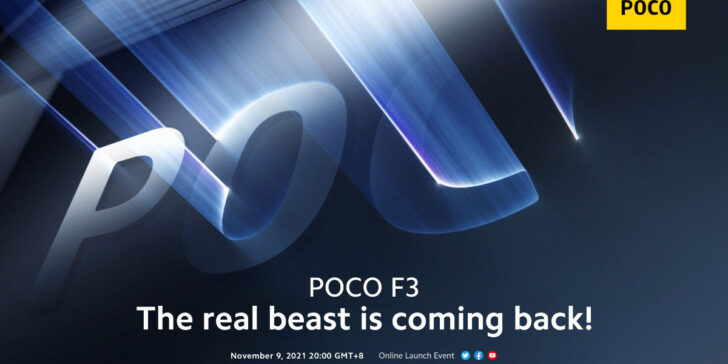 POCO M4 Pro will debut on the global market on November 9. There is speculation that it may be a rebranding of the Redmi Note 11 5G, which was launched in China recently. Now, while we are waiting for the announcement, POCO Global has made a surprising announcement. POCO F3 was released earlier this year, equipped with Snapdragon 870, 120HzE4 AMOLED screen, with MEMC, 33W wired fast charging, Dolby Atmos, and 48MP main camera. The new POCO F3 is expected to get a better chipset-possibly Snapdragon 888, improved optics, longer battery life, or faster-charging support. Unfortunately, the trailer image has not revealed more information about the phone.

Reviewing the specifications of POCO F3, it is equipped with a 6.67-inch FHD+ AMOLED display with 120Hz refresh rate, 360Hz touch response, tiny 2.76mm perforated cutout, and 3.5mm ultra-thin bottom bezel. The phone has a three-camera setup on the back, a 48MP Sony IMX582 main sensor with f/1.79 aperture and LED flash, an 8MP ultra-wide-angle lens with 119-degree FoV and a 5MP telephoto macro camera. There is a 20MP camera for selfies. Connectivity features include 5G, 4G LTE, Wi-Fi 6, Bluetooth 5.1, GPS, and USB Type-C for charging and data transmission.

POCO F3 is equipped with Qualcomm Snapdragon 870 SoC and 6GB+128GB and 8GB+256GB storage space, which can be further expanded through a microSD card. It runs MIUI 12 custom skin based on Android 11 out of the box and has a side-mounted fingerprint sensor to ensure safety. A 4,520mAh battery, 33W fast charging, and fuel-supported mobile phone.