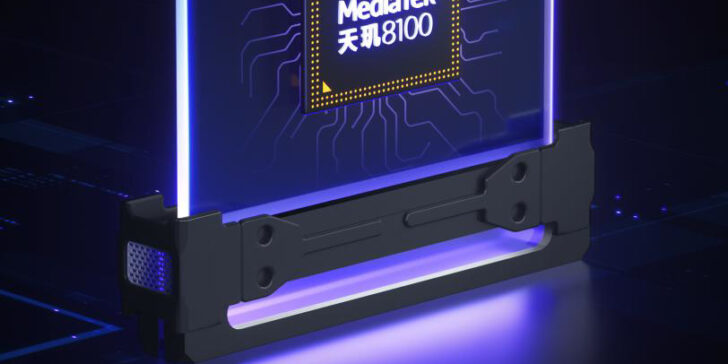 Realme has become the first mobile phone manufacturer to carry Dimensity 8100, and Realme GT Neo3 will be the first to carry it.

Realme announced that it had become the first mobile phone manufacturer to carry the Dimensity 8100 5G, and its new product Realme GT Neo3 will be the first to carry this chip.
For a long time, realme has maintained close cooperation with MediaTek and jointly launched a variety of 5G models, which has vigorously promoted the popularization of 5G smartphones. Especially the Realme GT Neo series, the first launch equipped with Dimensity chips, has won unanimous praise in the market. For example, the realme GT Neo, the world’s first Dimensity 1200, and the realme GT Neo2T, the domestic first launch of the Dimensity 1200-AI version, have attracted the attention of young users. And love, harvested excellent market performance and reputation. Realme has continuously made breakthroughs and innovations in products and technologies, maximizing the energy efficiency of chips and continuously providing young users with a leap-forward experience. Therefore, realme has become one of MediaTek’s important partners. This time, Realme GT Neo3 and MediaTek will be the first to be equipped with the “King of Energy Efficiency Ratio” Dimensity 8100 flagship chip, which will continue to promote the development and large-scale popularization of 5G in the world.

The Dimensity 8100 mobile platform adopts TSMC’s 5nm process and has excellent performance and energy efficiency. Designed with octa-core CPU architecture: 4 ARM Cortex-A78 cores with a main frequency of up to 2.85GHz and 4 ARM Cortex-A55 energy-efficient cores, and an ARMMali-G610 six-core GPU. This time, Realme GT Neo3 and MediaTek have been in-depth joint debugging to give full play to the advantages of the “high-efficiency” Dimensity 8100 flagship chip, bringing users a smooth and stable high frame rate gaming experience. In view of the much-criticized power consumption control of the Snapdragon 888, according to Fire Dragon, the Dimensity 8100 may become the “king of energy efficiency ratios” and “a new generation of God U.”

Realme is committed to providing 5G technology products with trendy design and leapfrog performance to young users around the world. The new products of the Realme GT Neo3 series are not only the first batch to be equipped with the Dimensity flagship chip 8100, but also the first to be equipped with a 150W light-speed second charge, which has the ultimate charging speed of “50% charge in 5 minutes”, making the Realme GT Neo3 the fastest charging in realme history. The fastest phone! Realme’s flash charging technology has always been known for its high security and is trusted by consumers. In order to achieve a faster-charging speed, realme put the UDCA light-speed second charging architecture into commercial use. The UDCA light-speed second charging architecture uses parallel multi-channel charge pumps to increase the charging current and achieves 150W high-power flash charging with lower conversion loss, lower resistance, and lower temperature. While achieving high power of over 100 watts, it is equipped with a temperature control management mechanism with a leading algorithm to keep the operating temperature below 43°C.

In addition to the 150W light-speed second charge and the expected Dimensity 8100 processor, according to the current revelations and network access information, the Realme GT Neo3 is also full of sincerity in the image configuration. It would be equipped with a Sony IMX766 main camera and support OIS optical image stabilization will also have a good performance in terms of images. Let’s wait and see what other surprises Realme GT Neo3 can create for young users