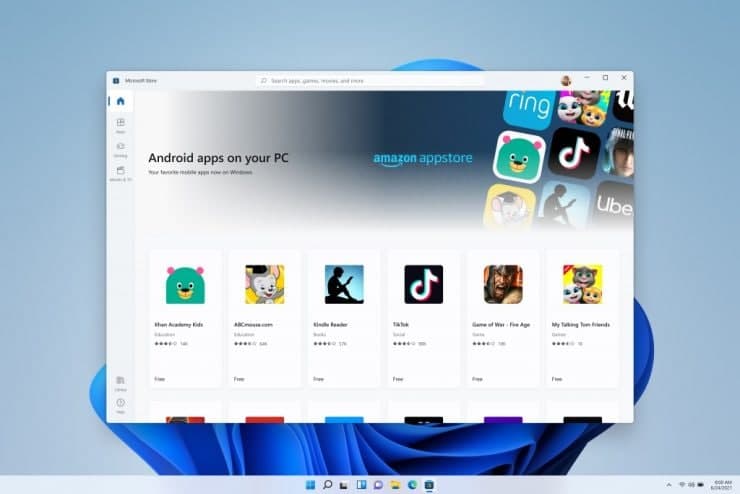 Android applications will run on Windows 11 Thanks to Intel bridge technology,
Windows 11 may change the company’s game rules. Microsoft today announced that the new operating system will support Android applications through the Amazon App Store. Later this year, users will download Tik Tok, Khan Academy, and other applications, and use these applications directly from the PC. The company will announce more information about this specific feature in the coming months.

Android apps and features for developers

The company will use the partnership with Amazon and Intel to use Intel bridging technology for these functions. We did not provide many details in today’s press release, but Android applications on Windows 11 may use Microsoft’s Windows Subsystem Linux 2.

The new features of the app store and the availability of Android apps will create a more open ecosystem, which will increase many opportunities for developers and creators. In addition, the company is inviting developers and software creators no matter what framework they use for application development. Therefore, if you are a developer using Win32, PWA, or UWP, Microsoft will welcome you with open arms. If developers are interested, they can register later today and use the open-source PWABuilder 3 to publish their applications or build and package PWAs.

In addition, the company also announced a revenue structure that will benefit developers. If developers choose to bring their business activities to the Microsoft Store, they can retain 100% of their revenue. If they use Microsoft’s business, they can even maintain an 85/15 competitive share. The game’s competitive revenue share is 88/12. In addition, from July 28, application developers will be able to bring their business platforms.

In the next few months, we will learn more about what the company prepares for itself and its developers, but we can say with certainty that Microsoft is working hard to create an open ecosystem. This will help the company, especially for competitors whose ecosystems are relatively closed.