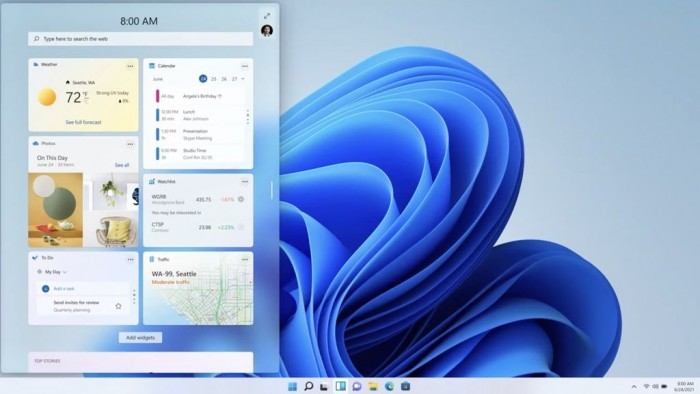 The interface of Windows 11 announced by Microsoft at the press conference is almost the same as the version leaked two weeks ago. Microsoft redesigned the Windows 11 start menu, which is displayed in the center by default, and the new system has a new icon style, finer transparency, new themes, improved light and dark themes, and ubiquitous window circles. angle.

The only difference is that other custom function buttons cannot be added to the centered start menu of the previously leaked version, but this function was added to the official version of Windows 11 on the interface displayed at the Microsoft press conference.

Another newly introduced design is Window Widgets. In fact, this feature has appeared on Windows 10, it is similar to an information flow aggregation page, Microsoft said that this is a personalized information flow driven by AI.

Two brand new applications have been actively updated on Windows 11.

The first is Edge, the default browser for Windows. The Edge browser on Windows 11 can design different theme skins under different desktops. At the same time, Microsoft has added a separate button for it. By clicking the button, the “tab” can be displayed vertically or horizontally. Microsoft said they hope to simplify the complex and give users the simplest and purest browsing experience.

Another brand new application is Teams, an online meeting software developed by Microsoft. This application has become a standard integration in Windows 11. This function will appear in the center bottom menu bar in the future. Users only need to click on this icon to quickly realize the video call function in the pop-up address book.