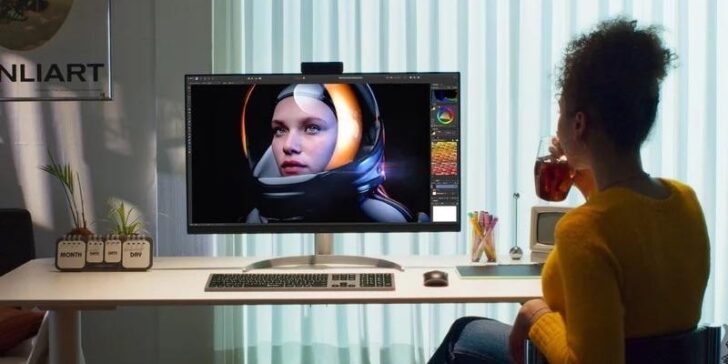 LG has been very active in launching new products recently. A few days ago, the company launched its first gaming laptop, and now, before the CES 2022 event, it announced two new displays: LG UltraFine Display and DualUp Display. Although UltraFine is an ultra-fine and traditional-looking monitor, the DualUp monitor is not the ordinary monitor you expect.

LG DualUp is neither a vertical display nor a horizontal display-it is somewhere in between. The aspect ratio of DualUp displays is not 16:9, but has a unique 16:18 aspect ratio. LG said that this screen provides you with “the same screen space as two 21.5-inch monitors, and has a vertical split view function, allowing users to see more content at a glance.” The company said that this form factor can be the largest Minimize the side-to-side movement of the head that causes neck pain.

Its resolution is 2560×2880 pixels and the diagonal size is 27.6 inches. LG said that DualUp covers 98% of the DCI-P3 color gamut, with a peak brightness of 300 nits. It even has a unique position. LG DualUp connects to the Ergo stand provided with LG, which can be connected to most desks. LG is recommending this monitor for video editing. They can put content on the top and editing tools on the bottom in a large window. LG DualUp does not support AMD FreeSync.

LG UltraFine Display is LG’s high-end ordinary display. It is a traditional 32-inch 4K Ultra HD display with a more traditional aspect ratio. It is the company’s first display using LG’s new Nano IPS black panel technology. Thanks to this new technology, UltraFine Display has a contrast ratio of 2,000:1. It has a peak brightness of 400 nits and it also has AMD FreeSync. There are many ports on the back of both monitors, such as USB-C, DisplayPort, and two HDMI ports.

LG said it will show more information about these displays at CES 2022 on January 4. It is not clear whether the company planned to hold a physical event at the time, because many people including T-Mobile, Meta, Twitter and even Amazon have cancelled their physical press conference at CES 2022.