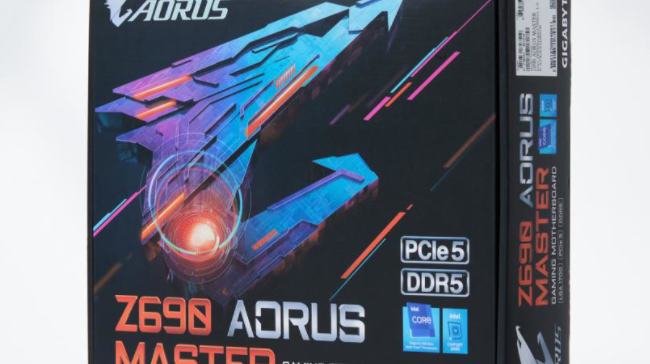 In our previous tests, Intel’s 12th-generation Core i9-12900K processor brought us a very amazing performance. At the same time, the new PCIe 5.0 and DDR5 features of the Z690 chipset also allowed the new motherboards to enter the next generation. . If you want to get the 12th-generation flagship processor in the car, then a solid and fully functional Z690 motherboard is necessary.

The GIGABYTE Super Carving Z690 AORUS MASTER motherboard is a standard-sized ATX version motherboard. The overall size is quite heavy and solid, and it seems that the configuration is quite luxurious. As a Super Eagle series motherboard, the heat dissipation armor of the key area is naturally indispensable, even in a small chassis with poor air ducts, it can provide stable heat dissipation for the core chip. When it is turned off, there will be a blue bright line on the heat sink, and when it is turned on, it will light up with RGB glare, which is quite cool.

As the CPU interface part of the core interface, Gigabyte Super Carving Z690 AORUS MASTER uses a brand-new LGA1700 interface, and the reinforced interface also provides a guarantee for the safety of the processor. Of course, due to the replacement of the interface, the CPU can only be compatible with the 12th generation Core. In this article, we will continue to use the i9-12900K that matches the positioning of this motherboard for testing.

Not only do you have to squeeze the material where you can see it, you can’t shrink it where you can’t see the backboard. The GIGABYTE Super Carved Z690 AORUS MASTER is not only equipped with a 2 ounce copper reinforced design, but also provided with a metal heat-dissipating armor on the back, which not only enhances the strength of the board, but also quickly derives the waste heat generated by the motherboard work, thereby ensuring that the CPU overclocks the motherboard. Additional power supply requirements.

In terms of power supply, the Gigabyte Super Carving Z690 AORUS MASTER motherboard has a 19+1+2 phase direct-out digital power supply. The processor contains 19 phases of power supply and each phase provides 105A current; the PCIe and memory controller directly connected to the CPU include 2 phases. DrMOS power supply. These all provide a stable power guarantee for the core area equipment of the motherboard, and better provide a stable environment for the overclocking of the processor and memory scenes. High-quality tantalum polymer capacitors have lower impedance, which can effectively reduce current fluctuations.

As a new generation motherboard, Gigabyte Super Carving Z690 AORUS MASTER motherboard also supports PCIe 4.0 M.2 hard disks, and provides up to 5 slots PCIe 4.0/3.0 hard disk interface, which can be directly connected to the CPU to achieve ultra-fast transmission speed , Because PCIe 4.0*4 hard drives are generally hot, Gigabyte Z690 AORUS MASTER is also equipped with two large heat dissipation armors, one of which has better independent heat dissipation performance, and the other has a larger area and wider coverage, which can meet most of the expansion. need.

GIGABYTE Super Carving Z690 AORUS MASTER has 3 PCIe slots and supports the next-generation PCIe 5.0 standard. Compared with PCIe 4.0, PCIe 5.0 has a higher bandwidth and is also backward compatible with PCIe 4.0 and 3.0. All slots are covered by alloy armor, which can prevent the graphics card from being bent due to too heavy weight.

In addition, the IO panel also has a Q-Flash Plus quick update button for BIOS update. You only need to put the BIOS update file in the U disk, insert it into the USB slot, and press the Q-Flash Plus button to quickly complete the BIOS. Update, you can update the BIOS without installing CPU and memory. This function will be especially useful when the CPU is updated.

GIGABYTE Super Carved Z690 AORUS MASTER motherboard BIOS continues the classic orange and black color scheme of the AORUS brand, and supports Chinese. After entering the BIOS, what you see is still the system information in simple mode, including CPU base frequency, memory frequency, temperature and other information. Among them, the memory frequency can be adjusted quickly through the XMP configuration.

After pressing F2 to enter the advanced mode, GIGABYTE Z690 AORUS MASTER provides many adjustment options, including memory and CPU overclocking. Users can adjust the relevant BIOS settings according to actual needs. Since this is a high-end Z690 motherboard, it also provides a lot of additional advanced overclocking options for enthusiasts to enjoy. It’s okay even if it’s too hard to turn on the machine. The motherboard has a BIOS clear button and a fault indicator built-in to provide the most intimate help for enthusiasts.

In terms of heat dissipation performance, we directly used AIDA64 for single-fired FPU. At the beginning, the power consumption even soared to 288W. After the 15-minute roasting machine test, the Gigabyte Super Carving Z690 AORUS MASTER did not experience overheating or power failure or blue screen. , CPU power consumption is always stable at about 235W, and the temperature is stable at 83°C. Only excellent power supply and heat dissipation can match the 12900K performance monster.

Next, let’s take a look at the theoretical performance of this processor on the Gigabyte Super Carving Z690 AORUS MASTER. We first use Cinebench R20. The R20 single-core score of the i9-12900K is 775 pts and the multi-core score is 10595 pts. The performance of the heroes.

In Cinebench R23, the single-core score of i9-12900K R23 is 2828 pts, and the multi-core score is 27716 pts, which can meet the needs of enthusiasts. The performance of the Gigabyte Super Carving Z690 AORUS MASTER motherboard is stable throughout the test process.

In the 3DMark CPU test, it can reach a score of 1104 for single-core and 11995 for multi-core. Performance fluctuations are also quite low. It can be seen that the power supply of the motherboard is very stable.

Memory testing is also a very important part. The running scores of DDR5 memory in the default state are shown in the figure. The read and write performance is more than double that of traditional DDR4 2133 memory, and it is also about 20% higher than that of 3600MHz memory. However, the corresponding delay is also higher by about 20ns, but we can reduce it to 4400 or 4000MHz through the XMP option, which brings high-speed + low-timing memory performance.

Finally, let’s run the popular “Forever Tribulation” to see the stability in the actual use environment. Under 1920*1080P resolution + high image quality, it can run at about 240 frames when running the graph. This sense of smoothness is really amazing.

In the fierce multiplayer battle, it can reach an average of 180-190 frames, and the game experience is still excellent. It seems that this configuration can be easily competent even at 4K resolution, allowing teenagers with martial arts dreams to enjoy the fun of e-sports .